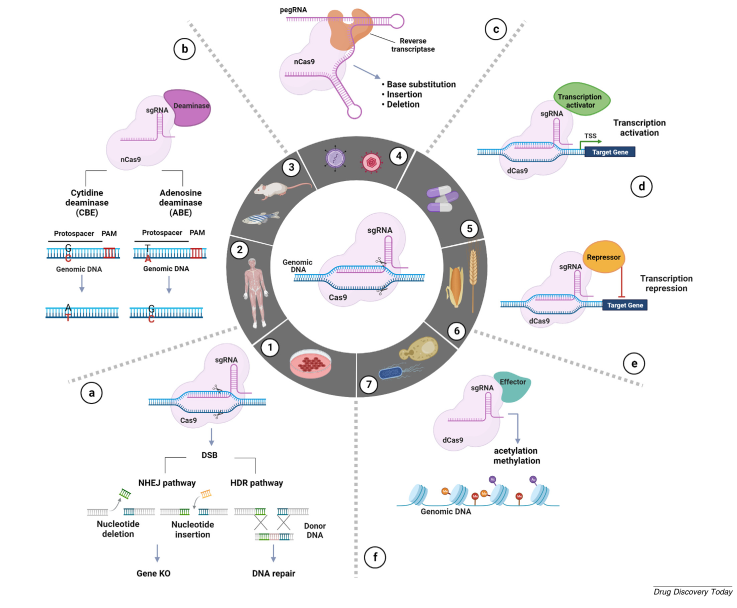 The first two decades of the 21st century have seen spectacular advances in molecular biology. Of these, the discovery of CRISPR/Cas9 has contributed significantly to changing approaches to genome editing.1 It has completely revolutionized our understanding of biomedical research, by allowing us to theoretically study, and even modify, the genome of almost any organism.2, 3 Indeed, the potential to treat genetic disorders directly could enable the development of novel therapies.4, 5 Despite such potential, there is still a long way to go. Although genome editing suffered setbacks during the late 1990s,6 and is still associated with ethical concerns, it is merely a question of time until it is integrated as a therapeutic modality in the clinic.7 This comes at a time when the CRISPR/Cas9 toolbox is continuously evolving to reduce associated constraints.2, 3 Depending on the gene-editing application and cellular target system, a suitable CRISPR/Cas technology has to be chosen. Both these parameters have to be considered during the final experimental design and are influenced by additional factors, such as the implemented delivery substrate and system, as well as the biological environment itself.3 Our understanding of gene delivery systems, such as viral vectors, has grown considerably in recent years.8 However, these natural shuttle systems, which are exploited to deliver the gene therapy machinery inside cells, are still associated with harmful drawbacks, such as immunogenicity, insertional oncogenesis, and off-target effects.9 In this context, another emerging branch of science gaining increasing implementation is nanomedicine, which can be used to circumvent limitations of conventional methodologies. The specificity of nanomaterials lies in their chemical and physical properties, which are intrinsic to their composition, shape, and nano-scaled size.10 Nanotechnologies are already implemented as medical diagnostics, monitoring tools, and treatment.11, 12 Indeed, more than 50 nanoformulations are on the market and more than 400 nanomedicine formulations are in clinical trials.13 With regards to gene therapy, a lipid nanoformulation received regulatory approval after a 20-year wait for the first RNAi drug.14 NTLA-2001, another emerging nanomedical therapeutic agent, was designed to treat transthyretin amyloidosis (ATTR) and was the focus of the first clinical study implementing the CRISPR/Cas9 technology in vivo.15 These remarkable examples are among several that blaze the trail for a new generation of innovative gene therapy medications, which take advantage of the combination of the CRISPR/Cas9 system and nanotechnology.

However, the CRISPR/Cas9 system itself has intrinsic safety constraints, causing, for instance, unintended DNA modifications at nontarget genomic loci or cytotoxicity.16 Thus, remote, controlled activation of the gene-editing machinery is important for many biological and medical applications. Given the complexity of most subcellular processes, full control is not always easily achievable. To overcome this general limitation, synthetic biology aims to develop tailor-engineered tools that can be exploited for specific purposes and be switched on/off.17, 18, 19 For instance, several studies have focused on the rational engineering of the CRISPR/Cas machinery, and its canonical and non-canonical roles, favoring a range of diversified applications.20, 21, 22, 23, 24, 25, 26, 27, 28 Within the next few years, approaches of synthetic biology harnessing the ‘natural’ benefits of the system, including its programmability, and combining them with modern technologies, are likely to become an important component in medical research. Thus, we envisage that the recent technological advances in the field could bring ground-breaking solutions in the near future. For instance, the design of tunable molecules and supramolecular complexes could switch gene-editing events on/off in a spatiotemporally precise manner by applying external stimuli. Gaining control over the activation or disengagement of the editing machinery could realistically improve the safety profile of the formulation, further amplifying its effective application spectra in therapeutics.

In this review, we briefly discuss the current opportunities and limitations of the CRISPR/Cas system. We highlight the advantages offered by a nanotechnology-based delivery and the rational design of CRISPR/Cas machinery in solving the open issues. We also introduce the concept of nanogenetics, an emerging discipline that combines nanomedicine and synthetic biology approaches for the design of programmable systems for gene editing, ensuring stable control at a high resolution.

The CRISPR/Cas system was discovered in 2004 as a prokaryotic adaptive immune mechanism that protects archaea and bacteria from bacteriophage and mobile genetic element infections,29, 30, 31, 32 targeting and cutting foreign genomes with the RNA-guided endonuclease Cas.33 Soon after, the CRISPR/Cas system was re-engineered for biotechnology applications. Given the unique simplicity and flexibility of the CRISPR/Cas technology, this system has been used for diverse applications (Fig. 1, inner circle). Among the different Cas proteins, Streptococcus pyogenes Cas9 (SpCas9) is the most widely used because of its simple application design. In combination with a specific synthetic guide, the sgRNA, the system is an easily achievable and efficient gene-editing tool.1 For instance, genetic engineering requires the design of the 20-nucleotide sequence in the sgRNA, resulting in sgRNA–DNA pairing when the protospacer adjacent sequence (PAM) is present on the nontarget DNA strand, proximal to the cleavage site.34 Upon target recognition, the Cas9 HNH (Histidine-Asparagine-Histidine, His-Asn-His) nuclease domain cuts the target strand whereas the RuvC-like nuclease domain cleaves the nontarget strand, generating a double-strand break (DSB).1, 33, 35

The crystal structure of SpCas9, associated with sgRNA and target DNA, has revealed detailed information on the mechanism of complex formation and function.36, 37, 38 The Cas9 architecture comprises two lobes: the nuclease lobe, containing the RuvC-like and the HNH domains, as well as the C-terminal PAM recognition domain, and the α-helical recognition (REC) domain, which is essential for binding to the sgRNA and the target DNA.36, 37, 38 The binding of the sgRNA to Cas9 induces conformational changes that reorient the two lobes, generating a channel to accommodate the target DNA and, thus, representing a stringent prerequisite for its activation.36, 37

Generation of the DSB activates the DNA damage response and cellular mechanisms for DNA repair. In eukaryotes, DSBs are mainly repaired by the error-prone nonhomologous end joining (NHEJ) mechanism, because the homology-directed repair (HDR) system is restricted to the G2 and S phases of the cell cycle.39 Whereas the exploitation of NHEJ for gene editing determines the incorporation of small insertions or deletions (indels, producing frame-shifts or premature stop codons) and even translocations, HDR can be used to introduce a specific modification by providing a donor DNA template containing the modified sequence (point mutations or insertions) flanked by sequences homologous to the upstream and downstream target region (Fig. 1a). Activation of NHEJ following Cas9 DNA cleavage has been used to create gene knockouts and perform high-throughput screens to study gene function in vitro and in vivo in animal models, while gene editing activating the HDR pathway has allowed for the correction of mutations in genetic diseases (reviewed in 40, 41).

Any cookies that may not be particularly necessary for the website to function and is used specifically to collect user personal data via analytics, ads, other embedded contents are termed as non-necessary cookies. It is mandatory to procure user consent prior to running these cookies on your website.